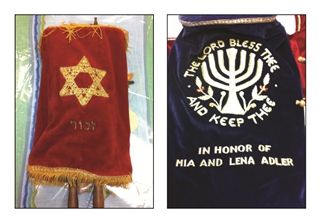 In 1964, the Memorial Scrolls Committee of Westminster Synagogue in London arranged for the shipment of 1564 scrolls to the Synagogue, where they were catalogued and repaired and restored when possible. Each Torah was given a numbered brass plaque to identify its origin. Scrolls that could not be made fit for synagogue use were sent to religious and educational institutions as solemn memorials. This is how we received our two scrolls. Scroll #181 was brought to us by Mr. Arthur Weil, and Scroll #296 was brought to us by Mr. Larry Adler. In 1983, then Schechter grandmother Marvell Ginsburg z’’l published her children’s picture book The Tattood Torah, which lovingly describes the journey of Scroll #181 from its original, vibrant community in Brno to its installation at Schechter, where the community excitedly welcomed it and adorned it with a new mantle.
We believe that a Jewish life should be a joyous life. When we see our precious Czech Torah scrolls, we recall the words of the Psalmist: “You have turned my mourning into dancing” (Ps 30:11). Indeed, our students read from the Torah and dance to its words just as they learn to build a bright future for all people.

The Memorial Scrolls Trust, a U.K. non-profit organization, has recently begun to reach out to synagogues and other institutions who received the Czech scrolls to gather updated information about them. They plan to continue to enhance their website so it becomes "a repository of all knowledge concerning the 1564 scrolls, the Jewish history of the towns they came from, the Jews of those towns, their fate, survivors stories, photos etc. Also where the scrolls are now, how they are used and honoured etc." More information about the Memorial Scrolls Trust is available on their website.
Beyond the Judaic education, Schechter provided the foundation for me to discover my passion for math and science. The teachers encouraged my curiosity and motivated me to pursue the subjects that I enjoy.
–Jonah Harris, SSDS ‘07, Structural Engineer, HBK Engineering BS in Civil Engineering, Tufts University
A partner with the Jewish United Fund in serving our community.